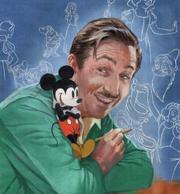 The Life of Walt Disney

From the Big Words series

A hagiographical account of the great animator’s early years and later triumphs.

Next to the rest of the inspirational and aspirational entries in the Big Words series (Martin’s Big Words, 2001, etc.) this carries a muddled message. Rappaport gives the nod to many of Disney’s creative innovations, but, particularly toward the abrupt end, Disney comes off as more control freak than genius. Efforts to sanitize his classic rags-to-riches career include a weaselly claim that he “felt betrayed” when his animators went on strike for proper pay and film credit (the accompanying picture shows him sulking in a chair as picketers march outside). Even in her afterword she neglects to mention some of his less-stellar achievements, such as his testimony before the House Un-American Activities Committee (and, for that matter, Song of the South). Several of the large-type taglines interspersed throughout are likewise bland (“Music has always had a prominent part in all our products”), and a closing reference to Disney’s legacy in the modern theme parks’ “many rides and many stores” sheds a rather commercial light on Walt’s characterization of Disneyland as an organic tribute to all imagination. In the illustrations, Pomeroy, a Disney Studios veteran, supplies big, vivacious views of his subject at various ages, often surrounded by versions or sketches of Mickey and other cartoon creations as well as a largely white workforce.

A shiny but veneer-thin profile.