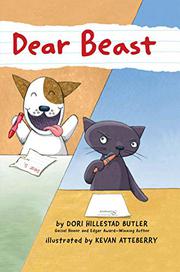 Simon the cat is angry. He had done a good job taking care of his boy, Andy, but now that Andy’s parents are divorced, a dog named Baxter has moved into Andy’s dad’s house. Simon believes that there isn’t enough room in Andy’s life for two furry friends, so he uses the power of the pen to get Baxter to move out. Inventively for the early-chapter-book format, the story is told in letters written back and forth; Simon’s are impeccably spelled on personalized stationery while Baxter’s spelling slowly improves through the letters he scrawls on scraps of paper. A few other animals make appearances—a puffy-lipped goldfish who for some reason punctuates her letter with “Blub…blub…” seems to be the only female character (cued through stereotypical use of eyelashes and red lipstick), and a mustachioed snail ferries the mail to and fro. White-appearing Andy is seen playing with both animals as a visual background to the text, as is his friend Noah (a dark-skinned child who perhaps should not be nicknamed “N Man”). Cat lovers will appreciate Simon’s prickliness while dog aficionados will likely enjoy Baxter’s obtuse enthusiasm, and all readers will learn about the time and patience it takes to overcome conflict and jealousy with someone you dislike.