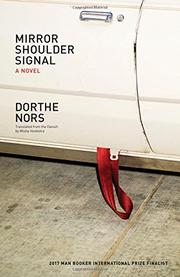 In this tautly observed novel, Nors reveals a middle-age woman on the verge of disappearance and discovery.

Danish writer Nors is a miniaturist; her book So Much for That Winter (2016) gathers two novellas that read like collections of epigrams, while her story collection Karate Chop (2014) brings together 15 microfictions, each imbued with an uneasy sense of loss. In this, the first of her four novels to be translated into English, she follows up on and enlarges these concerns. The story of Sonja, 40-something, a translator of Swedish crime fiction, the book unfolds in and around Copenhagen, but its true territory is the inner life. Sonja is stuck: bored of translation work, envious (but not really) of her sister who appears to have it all. She is learning to drive—the title is a reference to her instructor’s admonition about changing lanes in traffic—and she also suffers from positional vertigo, an inherited condition in which she can fall prey to dizziness simply by the wrong movement of her head. In part, all this is metaphor, a way to frame Sonja’s displacement. She is anonymous, much like the women Nors describes in her essay “On the Invisibility of Middle-Aged Women” (2016). At the same time, Nors is after something bigger than mere symbol; she is trying to excavate the pattern of a life. “But it doesn’t matter,” Sonja says late in the novel. “I manage, of course.” The line, in many ways, is key to the novel, which makes vivid drama out of the most mundane events. Not much happens here—some awkward interactions with her driving teachers, a couple of massages, some letters and phone calls with her family—but not much has to, for the drama Nors excavates is the most human one. What does it mean to keep on living? What does it mean to make a place for oneself, no matter how small or conditional? “A person who has her hand on the back of your heart,” Sonja reminds us, “shouldn’t be unsure.”

Nors is an exquisitely precise writer, and in rendering her heroine’s small disruptions and, yes, victories, she is writing for, and of, every one of us.