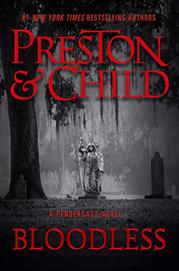 FBI Special Agent Pendergast and his cohorts face great peril as they try to find out what’s bleeding a Georgia city dry.

In 1971, the mysterious hijacker D.B. Cooper parachutes from a commercial airliner with a bundle of cash in the remote northwest and is never heard from again. A half-century later, Aloysius X.L. Pendergast and colleague Armstrong Coldmoon are sent to Savannah, Georgia, to investigate a “most peculiar incident”: a body has washed ashore with nary a drop of blood left in the corpse. A reader’s first thought might be What’s that got to do with an old hijacking? Leave it to the imaginations of Preston and Child to eventually make the delightfully strange connection. Pendergast looks every bit the stereotypical undertaker, not at all fitting the FBI mold. He brings along his adult “ward,” Constance Greene, who brings her stiletto everywhere she goes. Meanwhile, bloodless bodies accumulate. Who could possibly be committing these frightful atrocities? And why only in Savannah? That one’s easy: because it’s a spooky old city “with its gnarled trees and crooked houses,” and everything about the plot is spooky and surreal. A film crew prepares to create a phony documentary in a graveyard using smoke machines and showing callous disregard for the dead. A scheming U.S. senator frets that the rapid escalation in ghastly violence will hurt his reelection prospects, and he pressures the FBI for a rapid solution. Unfortunately, the killer makes an unholy mess of the city, sucking out its Southern charm along with plenty of blood. He—she—let’s settle on it—turns the tale into one of more horror than crime. Without Pendergast’s perspicacity, Coldmoon’s competence, and Constance’s cojones (figuratively, of course), that old city of mint juleps would be a smoking hole in the ground. And readers wouldn’t learn about D.B. Cooper’s fate. The authors’ imaginations run unfettered as they travel to unearthly locales, but in the end it comes down to beleaguered Savannah.

All of Pendergast’s adventures are weird and wonderful fun, and this is no exception.