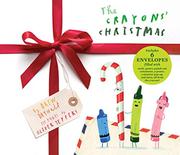 From the Creative Creature Catcher series

Actual cards and letters are tucked into envelopelike pouches pasted to the pages; these are joined in some cases by other ephemera for a package that is likely to invite sudden, intense play followed by loss and/or damage that will render the book a disappointment to reread. That’s probably OK, as in contrast to the clever story that kicked this small series off, this outing has a hastily composed feel that lacks cohesion. The first letter is addressed to Peach from Mom and includes a paper doll of the “naked” (de-wrappered) crayon along with a selection of tabbed changes of clothing that includes a top hat and tails and a bikini top and bottom. Peach’s implied gender fluidity does not mitigate the unfortunate association of peach with skin color established in the first book. The sense of narrative improvisation is cemented with an early page turn that takes the crayons from outdoors snow play to “Feeling…suddenly very Christmas-y, the crayons headed inside.” Readers can unpack a box of punch-out decorations; a recipe for gluten-free Christmas cookies that begins “go to store and buy gluten-free cookies”; a punch-out dreidel (turns out Grey is Jewish); a board game (“six-sided die” not included); and a map of Esteban (aka Pea Green) and Neon Red’s travels with Santa.

Haphazard but jolly enough for one outing; it probably won’t last for more.