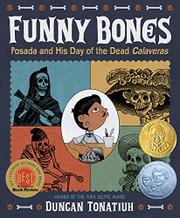 Posada and His Day of the Dead Calaveras

Tonatiuh’s Mixtec-influenced illustrations make an apt complement to this picture-book biography of one of Mexico’s most beloved artists, José Guadalupe Posada.

Don Lupe, as he was called, used the printing techniques of lithography, engraving, and etching. Each technique is summarized in four-panel layouts, and sample images of his calaveras and calacas (skulls and skeletons) are liberally incorporated into the illustrations. Many of the iconic images associated with Día de los Muertos were created by Posada as integral elements of his world-renowned political satire, particularly during the Mexican Revolution. Tonatiuh skillfully blends his own distinctive style of digital collage and hand drawings not only to highlight events in Posada’s life, but also to add whimsical elements by introducing contemporary calaveras. He incorporates amusing, thoughtful exercises for young readers into the narrative, prompting them to interpret the messages behind Posada’s artwork. Also included is an in-depth author’s note on the history of the Day of the Dead and an extensive glossary. In addition, a bibliography, list of art credits, and venues where Posada’s art is displayed are provided for further exploration of Posada’s life and work. Phonetic pronunciation is, unfortunately, only sporadically and unevenly sprinkled throughout the story.

Following on his Sibert Honor–winning Separate Is Never Equal (2014), Tonatiuh further marks himself as a major nonfiction talent with this artistically beautiful and factually accessible offering that effectively blends artistic and political content for young readers.