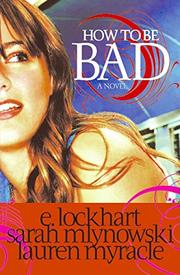 HOW TO BE BAD

This tale of three small-town high-school seniors traveling through Florida gives new meaning to the saying, “You don't really know someone until you travel with them.” In the case of Mel, Jesse and Vicks, they also really don’t know themselves. Mel, the insecure new girl, longs to go on a road trip with devout Christian Jesse and sassy, outspoken Vicks, who act like the friends she’s always wanted. Despite their differences, Jesse and Vicks are loyal to each other, but the secrets they keep threaten their friendship. What starts as a trip to Miami to see Vicks’s absent boyfriend becomes a drama fest of hook-ups, break-ups, dust-ups and make-ups. All three girls have distinct voices, and the ups and downs of their relationships will be familiar to any teenage girl with friends. The uneven pacing, however, gets very slow, and most of the peripheral characters are forgettable. This book will be an easy sell due to the authors’ combined popularity, but readers expecting a book on par with their previous works will be disappointed. (Fiction. YA)