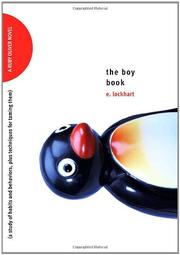 A Study of Habits and Behaviors, Plus Techniques for Taming Them

Shunned by her friends and ignored by her ex, Ruby Oliver experiences a rough junior year as she deals with fallout from her previous adventure in The Boyfriend List (2005), when she kissed her best friend’s boyfriend—a definite infraction of The Boy Book’s rules. The Boy Book, written by Ruby and her four ex-friends in sunnier times, is their quirky, funny and mostly chaste observations of boys and relationship rules. Snippets from the girls’ writings open and structure each chapter as Ruby strives to shake her “leper” status, but also provide a sincere account of their friendships and perceptions of sexuality. As the second Ruby Oliver installment, new readers may feel slightly off balance as they grapple with understanding and defining Ruby’s character, since Lockhart doesn’t dwell on details presented earlier. Yet Ruby’s lack of definition rings true as her character’s strength stems from her earnest search for identity through introspection, sexual experimentation, therapy and the formation and rehabbing of new and old friendships. Refreshingly honest. (Fiction. YA)