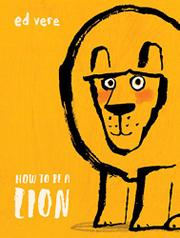 HOW TO BE A LION

A thoughtful lion decides whether he can be something other than fierce in this picture book.

Leonard is a lion, and while he is aware that the general expectation of lions is to be fierce, he opts not to live up to it. Instead he notices “the grass under his paws,” thinks up poems, and befriends Marianne, a duck. The other lions, stuck on the idea of fierceness, tell Leonard that they’ve heard he’s gentle and makes up poems, but befriending a duck instead of “chomping” her is going “too far!” Leonard and Marianne wander off to their “thinking hill” to mull this over, and they come up with… a poem to share with the “fierce” lions. The nub of the poem (which is simple, profound, and utterly lacking in schmaltz) is, “why don’t you, be you… / and I, will be I.” Beyond this universal sentiment, however, lies a timelier one. Readers will see an alternative male role model in Leonard: a strong-looking lion who thinks for himself, choosing creativity and friendship over superficial toughness. Author/illustrator Vere’s illustrations are sturdy in their rough black outlines and large swaths of muted color, but they’re evocative, too, in Leonard’s expressiveness and the predominantly orange/saffron palette that conjures the atmosphere of an African savanna.

Positive role models showing boys how to be a whole person are few and far between these days. This marvelous book triumphs in that essential job.