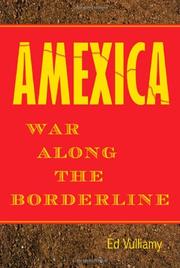 War Along the Borderline

A gutsy international journalist narrates life and death along the U.S.-Mexican border.

Former Guardian reporter Vulliamy (Seasons in Hell: Understanding Bosnia’s War, 1994) divides his time between Arizona and London. While writing about America for British readers, the author became fascinated with the mingling of national cultures along the 2,100 mile–long and 50 mile–wide swath he terms “Amexica.” He insists that it is not merely a clever word creation but a historically valid term whose meaning reaches back to Aztec cultures. Because of illegal narcotics moving from Mexico into the United States and more-or-less legal guns for the narcotraficantes moving the other direction, Amexica is a constant battlefield marked by thousands of murders, rapes and business-related shakedowns. However, as Vulliamy documents through hundreds of individuals featured in the book, the battlefield is also teeming with everyday life. The mixture means a minority of residents in Amexica suffer fear and joy simultaneously, with the joy deriving from high income. The majority of residents, however, subsist amid grinding poverty. Those who can find regular employment tend to labor in sweatshops along the border run by exploitative multinational corporations that have transferred many of the jobs from the continental United States, devastating cities north of the border. The author writes lyrically, with the enticing rhythm of his sentences contrasting jarringly with the degradation of humanity found on nearly every page, and Vulliamy generously credits authors who have documented the border in previous books in both English and Spanish. Some sections of the book may be familiar—especially the hundreds of murders of poverty-stricken single women around Ciudad Juárez, their bodies left to rot in the desert while law-enforcement agencies express bafflement—but most of the narrative feels fresh because it is based so heavily on Vulliamy’s own wanderings.