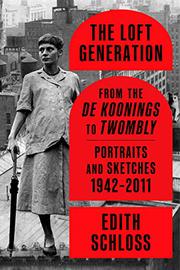 An intimate portrait of artists and their worlds.

From assorted notes and manuscripts, Burckhardt and Venturini have assembled a vibrant memoir by artist and critic Edith Schloss (1919-2011), Burckhardt’s mother, who lived and worked in New York City in the 1940s and ’50s and, after 1962, in Italy. Born into an affluent Jewish family in Germany, Schloss was sent abroad to school; by 1938, she found her way to London and, a few years later, arrived in New York. She enrolled at the Art Students League and soon moved to Chelsea, where artists had taken over cheap, barely habitable lofts—“huge stages for work and for a whole new free way of living.” Her circle quickly expanded to include Fairfield Porter; William de Kooning (she was dazzled by his “absolute sunstruck power”); his acerbic wife, Elaine; photographer Rudy Burckhardt, whom Schloss later married; composers Elliott Carter and John Cage; poets Frank O’Hara and Kenneth Koch; and scores of others. At the time, most were aspiring rather than acclaimed artists. “In those days,” writes Schloss, “nobody was anybody. Friends were friends, and they brought you their pictures,” sometimes for criticism and encouragement, sometimes as gifts. But this splendid memoir is more than a who’s who of famous figures. From Edwin Denby, Schloss learned to “look at the quotidian, look at the world around you,” and “celebrate it the best you can.” Shrewdly observant, Schloss conveys in painterly prose the spirited individuals whose lives she shared and the worlds they inhabited: Porter’s bedroom walls, painted “milk blue or a raw bluey-pink”; Franz Kline, “Bogart-like cool and melancholy”; the “fugitive” sparkle of Denby’s flashing eyes; and, not least, the creation of abstract art from “the marvelous movement of the loaded brush, the flow of paint on paint.” The book is generously illustrated with snapshots and artworks and appended with a biographical essay and glossary.

A captivating memoir of a life in art.