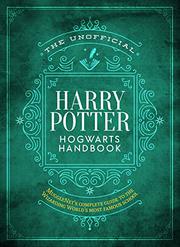 Mugglenet's Complete Guide to the Wizarding World's Most Famous School

by Editors of MuggleNet

Everything entering students need to know, from class and holiday schedules to notable ghosts and headmasters and headmistresses.

Compiled by a team of MuggleNet editors, this fourth annual entry in the Unofficial Harry Potter Reference Library mines the Potterverse’s books, films, games, discussion boards, and possibly even pensieves for fictive “facts” about the school’s buildings, grounds, curriculum, history, and prominent residents—living and otherwise. The entries are thoroughly spoileriffic, but that hardly matters as there are no illustrations, and only rabid fans are going to last long plowing through wearisomely detailed prose descriptions of the Hogwarts crest and official song, the castle’s common rooms and corridors…not to mention numerous exhaustive lists, from the names and injuries of everyone ever sent to the hospital wing and every offense, real or imagined, for which students were docked points to all the shops and inns in the adjacent village of Hogsmeade. The content is unsourced and neither indexed nor systematically organized. Still, readers who would delight in seeing the Battle of Hogwarts recapped as a timeline along with, for instance, learning where Hogwarts is and how it got its name will be in their glory. As in the original series, the cast’s racial makeup defaults to White.

Tasty in bits, but even Pottermanes may find this indigestible in quantity.