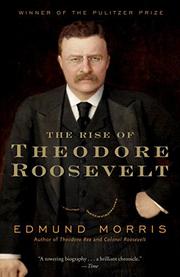 THE RISE OF THEODORE ROOSEVELT

Everything that, in time, made TR an irresistible force the curiosity and concentration, the energy, the ardor, the dramatic flair vitalizes this hugely detailed, over-long (700 pp), and rather florid account of his life up to the presidency. But Morris is also locked into his concept of Roosevelt's "rise," persistently seeing in the sickly, bookish, solitary boy and the lovelorn Harvard dandy the future leader of men. It's the colorful, charismatic personality we have here, then, largely minus the drifting, the despondency and self-doubt that afflicted him even after he "rose like a rocket" (in his own words) to leadership of the New York State Assembly at the precocious age of 23. But those who were there to see it or, later, to witness his exuberant embrace of the still-wild West, his crusade as New York City Police Commissioner to stamp out Sunday liquor sales, have provided Morris with great copy: the toothy grin lighting up a sodbuster's hut; the cheerful, chest-thumping retort to a German protest-marcher's "Wo is der Roosevelt?" "Hier bin ich!" Never mind that, in the latter instance, Morris keeps equally close tabs on his running feud with a fellow-commissioner; the detail pays off when Roosevelt, escaping to the wider fields of Washington, puts the Navy in position to strike at Spain in "three or four hours" as Acting Secretary to the consternation of his boss, innocently off seeing an osteopath. Nothing here is really new not the jingoism, the personal rush to arms that soon had Roosevelt second-in-command (and, of course, foremost) of the Rough Riders, the compromise with Boss Platt that enabled him to function as New York's Governor, the ambivalence about the Vice-Presidential nomination. And wherever Morris' interpretation differs from that of Henry Pringle, still Roosevelt's best biographer, his penchant for histrionics warps his judgment: "With fulfillment [atop San Juan Heights] came purgation. Bellicose poisons had been breeding in him since infancy. . . . But at last he had had his bloodletting. . . Theodore Roosevelt was at last, incongruously, a man of peace." The real lesson, willy-nilly, is in seeing the fun he had being a great, boyish nuisance.