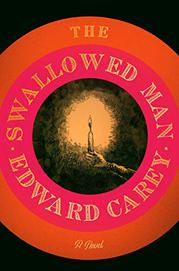 A retelling of Pinocchio from Geppetto's point of view.

The novel purports to be the memoirs of Geppetto, a carpenter from the town of Collodi, written in the belly of a vast fish that has swallowed him. Fortunately for Geppetto, the fish has also engulfed a ship, and its supplies—fresh water, candles, hardtack, captain’s logbook, ink—are what keep the Swallowed Man going. (Collodi is, of course, the name of the author of the original Pinocchio.) A misfit whose loneliness is equaled only by his drive to make art, Geppetto scours his surroundings for supplies, crafting sculptures out of pieces of the ship’s wood, softened hardtack, mussel shells, and his own hair, half hoping and half fearing to create a companion once again that will come to life. He befriends a crab that lives all too briefly in his beard, then mourns when “she” dies. Alone in the dark, he broods over his past, reflecting on his strained relationship with his father and his harsh treatment of his own “son”—Pinocchio, the wooden puppet that somehow came to life. In true Carey fashion, the author illustrates the novel with his own images of his protagonist’s art: sketches of Pinocchio, of woodworking tools, of the women Geppetto loved; photos of driftwood, of tintypes, of a sculpted self-portrait with seaweed hair. For all its humor, the novel is dark and claustrophobic, and its true subject is the responsibilities of creators. Remembering the first time he heard of the sea monster that was to swallow him, Geppetto wonders if the monster is somehow connected to Pinocchio: “The unnatural child had so thrown the world off-balance that it must be righted at any cost, and perhaps the only thing with the power to right it was a gigantic sea monster, born—I began to suppose this—just after I cracked the world by making a wooden person.” Later, contemplating his self-portrait bust, Geppetto asks, “Monster of the deep. Am I, then, the monster? Do I nightmare myself?”

A deep and grimly whimsical exploration of what it means to be a son, a father, and an artist.