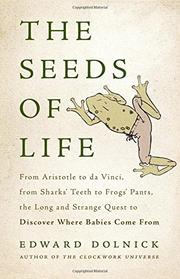 THE SEEDS OF LIFE

From Aristotle to Da Vinci, from Sharks' Teeth to Frogs' Pants, the Long and Strange Quest to Discover Where Babies Come From

A history of the “search for the solution to the sex and conception mystery,” focused on the period between 1650 and 1900.

As former Boston Globe chief science writer Dolnick (The Rush: America's Fevered Quest for Fortune, 1848-1853, 2014, etc.) notes at the beginning of his latest book, “not everyone has wondered why the stars shine or why the earth spins,” but “every person who has ever lived has asked where babies come from.” Thoughtful scientists have confidently delivered the wrong answer, and the author provides a delightful history of what happened until they got it right. Everyone knew that an egg was involved, although brilliant anatomists (Vesalius, William Harvey) searched humans in vain. Semen was essential and—as men were considered the superior sex—the most important factor, but its role remained mysterious. When Antonie van Leeuwenhoek turned his microscope on his semen in the 1670s, he believed that each of the innumerable wiggling creatures contained a tiny human. Most scientists disagreed, insisting that the tiny human resided inside the still-unobserved human egg. This was “preformism.” To early scientists, making an embryo from nothing was absurd. More refined experiments and the discovery that cells make up all living things produced impressive advances, but it was not until 1875 that a German biologist who remains mostly unknown (Oscar Hertwig) first saw a single sperm penetrate an egg (of a sea urchin) and fuse with the nucleus, after which the cell began to divide. Researchers then turned their attention to what happens afterward, but, having effectively answered the big question, Dolnick stops there.

The best sort of science history, explaining not only how great men made great discoveries, but why equally great men, trapped by prejudices and what seemed to be plain common sense, missed what was in front of their noses.