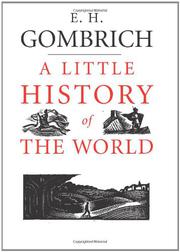 A LITTLE HISTORY OF THE WORLD

A lovely, lively historical survey that takes in Neanderthals, Hohenzollerns and just about everything in between.

In 1935, Viennese publisher Walter Neurath approached Gombrich, who would go on to write the canonical, bestselling Story of Art, to translate a history textbook for young readers. Gombrich volunteered that he could do better than the authors, and Neurath accepted the challenge, provided that a completed manuscript was on his desk in six weeks. This book, available in English for the first time, is the happy result. Gombrich is an engaging narrator whose explanations are charming if sometimes vague. (Take the kid-friendly definition of truffles: “Truffles,” he says, “are a very rare and special sort of mushroom.” End of lesson.) Among the subjects covered are Julius Caesar (who, Gombrich exults, was able to dictate two letters simultaneously without getting confused), Charlemagne, the American Civil War, Karl Marx, the Paris Commune and Kaiser Wilhelm. As he does, he offers mostly gentle but pointed moralizing about the past, observing, for instance, that the Spanish conquest of Mexico required courage and cunning but was “so appalling, and so shaming to us Europeans that I would rather not say anything more about it,” and urging his young readers to consider that perhaps not all factory owners were as vile as Marx portrayed them to be, even though the good owners “against their conscience and their natural instincts, often found themselves treating their workers in the same way”—which is to say, badly.

Conversational, sometimes playful—not the sort of book that would survive vetting by school-system censors these days, but a fine conception and summarizing of the world’s checkered past for young and old.