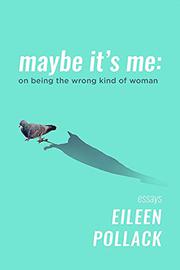 On Being the Wrong Kind of Woman

A master of the long-form personal essay discourses on a variety of subjects.

Novelist, physicist, and writing professor Pollack serves up 16 essays, some previously published in Prairie Schooner, Ploughshares, New England Review, and other literary journals, digging deep into memoir material and other topics of interest to her. Among others, these include whether the shah of Iran could possibly be Jewish, as a friend of her family claimed, and a critical dissection of an antiquated sex education book she was given as a child. “The hideous black-and-white diagram of 'the mother's reproductive system' resembled a disapproving, big-nosed secretary in hideous cat's eye glasses, while the map of 'the father's reproductive system' reminded me of an evil alien with testicles for eyes and a penis and foreskin for the nose," she writes. The author’s candor, curiosity, humor, and gift for phrasemaking are engaging regardless of the topic, many of which are misfortunes of varying severity. Pollack’s childhood was largely unhappy, as she was singled out in school for both her intelligence and her orneriness, but many of her classmates, it turns out, suffered much worse. Later in life, she was “peed on, shot at, and kidnapped”—all in one summer. After her marriage, which produced her lovely son ("I Tried To Raise a Jew and He Turned Out a Communist"), she had little luck with men. There was the "Righteous Gentile”—"When I told my mother I was dating a Polish Catholic, the abyss that opened in our conversation was so deep and dark I could see three generations of our family tumble into it"—followed by a slew of lesser men, documented in the title essay, aptly subtitled "The One Woman Show I'll Never Perform in Public." Why not? At almost 30 pages, it's ripe for a comedy special.

Yet more compelling work from a unique mind.