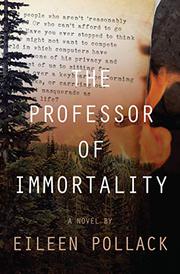 THE PROFESSOR OF IMMORTALITY

Adrift in her personal life and career, a professor of future studies discovers that an ex-student might be a homegrown terrorist—and that she too might have skin in the game.

In 1996, the FBI ended one of the longest manhunts in its history by arresting Theodore Kaczynski, a Harvard-educated math genius, who railed against the ill effects of technology and systematically mailed bombs to select targets across the United States to underscore his point. More than two decades on, the drumbeat about the perceived dark side of technology has only become louder. It makes sense then that Pollack (The Bible of Dirty Jokes, 2018, etc.) uses the Unabomber as the scaffolding for this novel, which unfolds primarily through the lens of Maxine Sayers, Director of the Institute of Future Studies at the University of Michigan. Max has lost her husband (and fellow professor), Sam, who has been dead for eight years, and her engineer son, Zach, who once worked for a Silicon Valley startup and has gone off the grid and cut off contact with Mom. What’s worse, funding for the institute that Maxine Kickstarted is drying up. Against this backdrop, she reads a “Technobomber’s” manifesto and worries that the author sounds like one of her former students. As Max unravels the various layers, she and her family get sucked into the maelstrom created by the Technobomber’s sensationalism. Maxine too is ambivalent about technology, and the plot sags under the weight of her frequent expositions: “If intelligence meant an awareness of one’s self, how could a machine become aware? Of what? That it had no self to be aware of?” Stilted similes—“The eighteen-year-olds who make up the majority of Ann Arbor’s population are like stem cells: put any two in a petri dish, squirt on nutrient solution, and each will take on the characteristics of the other”—don’t help the cause, either. The straitjacketed characters miss emerging into their true selves. Perhaps the narrative would have been better served as a short story than a full-fledged novel.

An earnest if overzealous examination of the side effects of technology on humanity.