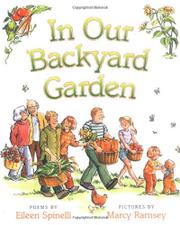 IN OUR BACKYARD GARDEN

In a series of free-verse observations, a child tracks a year’s changes in her extended family through episodes in her grandparents’ garden. Along with routine chores, the year brings changes large and small, from a cousin’s pierced new boyfriend (still, promisingly, around the following spring), to an older aunt’s brief, disastrous driving lesson, a new job for Dad, a new baby, and a wedding. Despite holding enough plot for a novel, the poems seem as spacious as the well-tended setting, and Spinelli’s language frequently takes flight. Responding to an ominous forecast on that wedding day, Grandpa “waves the weather-words away. / He tweaks my cheek. ‘Think sun,’ he says. / ‘Think sun.’ / And sun it is the whole sweet day. / The whole sweet day.” Though she’s evidently never seen a crocus, Ramsey offers busy but not overcrowded scenes featuring a multigenerational cast of generally, but not invariably amicable folk, working, playing, or just hanging out together in a succession of seasons. By the end, readers will feel like members of this engaging family. (Poetry. 7-10)