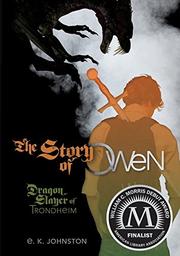 THE STORY OF OWEN

From the Story of Owen series, volume 1

In an alternate world where humans and dragons battle over fossil fuels, the tale of one slayer and his bard becomes a celebration of friendship, family, community and calling.

Once, every village had its own dragon slayer, but those days are long gone; now, slayers are drafted by governments or sponsored by corporations. Sixteen-year-old Owen Thorskard, scion of a renowned line, wants to help reverse that—starting with the rural Canadian town of Trondheim. While Owen is brave, dedicated and likable, this story really belongs to Siobhan McQuaid, dauntless bard-in-training. In her witty account, Siobhan learns alongside Owen from his heroic aunt and her blacksmith wife, schemes with classmates to create local Dragon Guards and enlists the entire county in a daring scheme to attack the dragons’ own turf. Humor, pathos and wry social commentary unite in a cleverly drawn, marvelously diverse world. Refreshingly, the focus is on the pair as friends and partners, not on potential romance; Siobhan places as much emphasis on supporting her allies as extolling Owen’s deeds. Smart enough to both avoid unnecessary danger and be scared when appropriate, they prove all the more valiant when tragic sacrifices have to be made.

It may “[take] a village to train a dragon slayer,” but it takes an exceptional dragon slayer to deserve a village—and a storyteller—like this one.