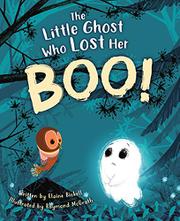 THE LITTLE GHOST WHO LOST HER BOO!

What can a ghost do when she’s lost her boo?

Little Ghost has a dilemma. Attempting to frighten an unsuspecting human (who presents White), she finds to her dismay that, instead of her signature sound, only “a rush of cold air” escapes her mouth. Mama Ghost sympathizes but fears her child’s “fright nights are done.” Not one to give up easily, Little Ghost launches a search. She encounters her friends Owl, Pigeon, and Rooster, whose sounds are all similar to “Boo”; unable to join Little Ghost in her search for her boo, they offer to lend her their cries. She declines, explaining that, while the calls are perfect for them, they aren’t as scary as hers. She finally heads home, despondent, and meets another pal whose voice resembles her own. In an unexpected concluding twist, Little Ghost locates the friend she most needs, the one who will assuredly help reclaim her boo-tiful sound. This cute but thin rhyming New Zealand import will appeal to ghost fans; they’ll definitely want to comply—loudly—with the final instruction. The jaunty rhyming couplets mostly succeed but are sometimes awkward. Illustrations and white text type pop against saturated turquoise backgrounds. Occasionally, certain words and onomatopoeic sounds, such as the animals’ calls, are capitalized and appear in display type for dramatic effect. Chubby Little Ghost is amorphous, winsome, and wide eyed. Her pals have a bright, folk art–y appearance.

In time for Halloween, a BOO-k about a ghost that young readers will enjoy.