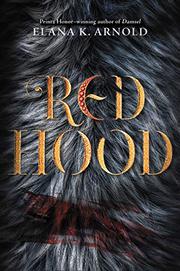 Following an embarrassing incident between Bisou and her boyfriend, James, after the homecoming dance, a humiliated Bisou runs into the Pacific Northwest woods. There, she kills a giant wolf who viciously attacks her, upending the quiet life she’s lived with her Mémé, a poet, since her mother’s violent death. The next day it’s revealed that her classmate Tucker— who drunkenly came on to her at the dance—was found dead in the woods with wounds identical to the ones Bisou inflicted on the wolf. When she rescues Keisha, an outspoken journalist for the school paper, from a similar wolf attack, Bisou gains an ally, and her Mémé reveals her bloody and brave legacy, which is inextricably tied to the moon and her menstrual cycle. Bisou needs her new powers in the coming days, as more wolves lie in wait. Arnold (Damsel, 2018, etc.) uses an intriguing blend of magic realism, lyrical prose, and imagery that evokes intimate physical and emotional aspects of young womanhood. Bisou’s loving relationship with gentle, kind James contrasts with the frank exploration of male entitlement and the disturbing incel phenomenon. Bisou and Mémé seem to be white, Keisha is cued as black, James has light-brown skin and black eyes, and there is diversity in the supporting cast.

A timely and unabashedly feminist twist on a classic fairy tale.