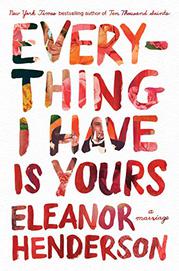 EVERYTHING I HAVE IS YOURS

Portrait of a long-lasting marriage tempered by challenges ranging from drug abuse and infidelity to mental illness.

Nearing the end of high school, Henderson, a straight-laced young woman, fell in with a handsome, older record-store clerk before heading to college. “Tomorrow I’d wear a blue tank top and no bra,” she writes of their second date, “and afterward Aaron would insist that we play pool, and I’d spend the whole time shooting pool while standing perfectly straight, so as not to expose my A-cup cleavage.” He was seven years older, worldly, and sexually experienced, while she had had a few fumbling dates and was, by her account, a bit klutzy. As she learned about Aaron’s drug use, she also found evidence of alcohol abuse and philandering. Then evidence of another kind turned up: the possibility of schizophrenia, which eventually manifested in a terrible syndrome with blistering skin and endless pain. “The quart bottles begin to appear in the cabinet, in the recycling bin, on the kitchen counter,” writes Henderson. “Blue gin the color of mouthwash. Watch him relax. Watch the sores fade to rosy scars.” In time, the problem was identified as Morgellons disease, which, because it’s not well understood, many doctors brush aside. Consulting the only book on Morgellons she could find on Amazon, she found some relevant information—e.g., “with no hope in sight, it is no wonder that most Morgellons patients have depression, anxiety, and/or suicidal thoughts and many have ended their lives.” Though still fraught, the marriage survived the pandemic isolation and into the present. Henderson is self-aware enough to understand that her behavior has been sometimes codependent, and her prose is all fine turns of phrase with the rawest of nerve endings. The sole fault of the book is that it runs too long, with some repetition, and could have benefited from judicious trimming.

A memoir of interest to anyone coping with a loved one’s struggle with illness and dependency.