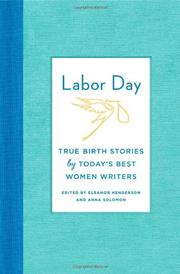 Thirty-one female writers (including the editors) narrate their highly personal experiences of giving birth, beginning with the choices they made in advance, and how the reality compared with their expectations.

Henderson (Fiction Writing/Ithaca Coll.; Ten Thousand Saints, 2011) and Solomon (English/Brown Univ.; The Little Bride, 2011) first met in 2005 at the Bread Loaf Writer's Conference in Vermont. They remained friends and kept in touch, and the genesis of this book was an email from a very pregnant Henderson to Solomon asking for details about the birth of her first child. She felt overwhelmed with the wide range of choices to be made: Should she opt for natural childbirth and a midwife or an obstetrician? What about epidurals, and when is surgical intervention required? After their discussions, Henderson and Solomon realized that there was a book’s worth of material to share. Despite the wealth of how-to books on pregnancy and parenting, what was missing from bookshelves was the kind of highly personal account that Solomon shared with Henderson. They wanted “artful, entertaining, unvarnished accounts of labor and delivery.” They pitched the idea to writer friends who were mothers, and the response was overwhelmingly positive. The contributors chronicle their expectations and the nitty-gritty of the process from the onset of contractions to the moment of birth. As many of the stories illustrate, the feminist ideal of natural childbirth is appealing but not necessarily realistic. Unforeseen medical emergencies are part of the territory; both infants and mothers may be at the point of collapse during extended labor, requiring surgical intervention. Gina Zucker writes exuberantly, “In spite of the pain, or in part because of it, having a natural childbirth had been incredibly empowering.” The editors also include sadder stories, accounts that deal with birth defects that might have been avoided with quicker medical intervention. Other contributors include Cheryl Strayed, Lauren Groff, Ann Hood, Dani Shapiro, Heidi Julavits, Jennifer Gilmore and Sarah Shun-lien Bynum.