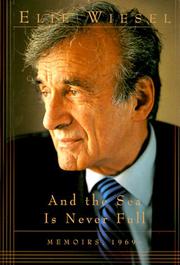 AND THE SEA IS NEVER FULL

Nobel Prize-winner Wiesel (All Rivers Run to the Sea, 1996, etc.) concludes his memoirs in his characteristically engaging and conversational tone.

Wiesel tells us about his marriage to Marion (“for the first time, at age forty, I experience daily life with a woman”), his frequent meals with Golda Meir and Teddy Kolleck, and the birth of his son Elisha.  We read about his exploits as human rights activist:  a meeting in Paris to protest UNESCO’s policy towards Israel; a 1980 march for Cambodia; his efforts to get Abraham Sarfati, a Moroccan Jewish political prisoner, released; a trip to South Africa to witness apartheid; testimony before the Senate Foreign Relations Committee about ratifying the Genocide Treaty (“when I find out that Jesse Helms is chairing the session, my instinct is to turn around and head back to New York”).  We follow Wiesel’s teaching exploits at City College, Boston University, and Yale.  We accompany him on a speaking tour that takes him from Washington to Moscow, and we hear Lamentations read at a Tisha B’Av service in Warsaw.  Of the conversations with famous folks Wiesel reports, the most interesting is his meeting with Jean-Marie Lustiger, the Jewish-born archbishop of Paris, who explains to Wiesel why he still considers himself a Jew, even as Wiesel explains to Lustiger why Jews find that position untenable.  Finally, Wiesel attempts to come to grips with the suicides of three writers – Primo Levi, Jerzy Kosinski, and Piotr Rawicz.  It is, to be sure, the memoir of a famous man, one who assumes his travels and conversations and stage fright are interesting simply because they are his.  He is not always right – but the many times he is make the book worthwhile.  (16 pages photos)