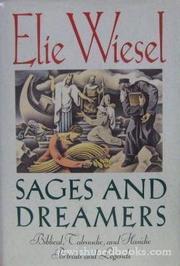 Reflections by the Nobel-winning philosopher and novelist on the prophets, scribes, and rebbes who comprise the histories and myths of Jewish folklore. Most of these essays were originally given as lectures at the 92nd Street Y in New York, and even in written form they preserve the tone and tempo of extemporary speech. The style is anecdotal rather than scholarly, and Wiesel does not hesitate to bring his opinions to bear (such as on the story of Jephthah, for instance, of which he declares, "This story is...so frightening that I wish it could be erased from Scripture"). Such an approach is bound to have its drawbacks, and Wiesel's treatment of the Bible leaves much to be desired: It is to his credit that he examines it as a narrative of spiritually resonant stories rather than as a scholarly text, but he seems rather too anxious to draw particular conclusions (especially in regard to the paradox of suffering) from passages that do not necessarily support his view. HIS consideration of the Talmud is much more insightful, and his tales of the great Hasidic rebbes form the best part of the book: a fascinating mosaic of hagiography and legend. Behind all of these accounts is the tragic awareness, sometimes explicit but usually unspoken, of the catastrophe that would ultimately strike the Jews of Europe, a catastrophe that Wiesel himself witnessed and survived. His book provides clear testimony of the survival, not only of an individual soul but an entire history. Informative and moving: a rich collage.