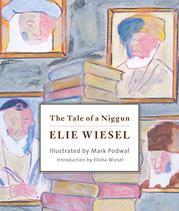 THE TALE OF A NIGGUN

Written in the late 1970s and included in a long-out-of-print collection of Holocaust survivor and Nobel laureate Wiesel's essays, the poem is set on the eve of the Jewish holiday of Purim. That's when the "enemy" (the word "Nazi" is never used) announces they will massacre everyone in the ghetto unless 10 Jews are turned over for hanging—this to avenge the killing of the 10 sons of Haman, the anti-Semitic scourge of the Purim story. Overwhelmed by this unthinkable dilemma, the ghetto rabbi feels "his knees weakening, the blood rushing to his face." Searching for answers, he consults the great religious thinkers through their writings. Maimonides, the Rambam, states that a community should perish before handing over one of its members to the enemy, but pressed by the rabbi, his talking spirit concedes that he can't be of help because he never could have foreseen such a predicament. The Baal Shem Tov, or Besht, the founder of Hasidism, teaches the rabbi a special niggun, or song, that confers hidden powers "to break the chains of evil and malediction." But the Besht is so overcome by sadness that he can't infuse the song with the joy it needs. Ultimately, when the niggun is sung by the ghetto community, it conjures a miraculous coming together of Jews—not only from all over Europe, but also from the pages of the Talmud. Accompanied by Podwal's quietly haunting full-page illustrations, Wiesel's spare language cuts to the heart of human loss while the rhythms of the poetry capture the sad, endless march of inhumanity through history. At the same time, this poem sings out the power of belief and community and love.

A modest but affecting work with timeless relevance.