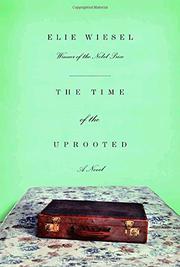 THE TIME OF THE UPROOTED

“Do you know why God created us? So we could tell one another stories.” Novelist, memoirist and folklorist Wiesel (Wise Men and Their Tales, 2003, etc.) blends fiction, legend and perhaps reminiscence in a moving tale of a fast-disappearing time.

Gamaliel Friedman is a lover of stories, a habit he acquired young from his father, who “used to say that a man without a story is poorer than the poorest of men.” Friedman knows all about being poor; displaced from his native Czechoslovakia by the Nazi annexation, he spent his early years in hiding, depending on the kindness of a Hungarian woman for survival. Fleeing Hungary after the 1956 uprising, he arrives in America and begins to trade in new stories, and in two ways. First, he becomes a ghostwriter, an accidental trade that allows him the wherewithal to work on his own “Secret Book”; the “sorry collections of clichés that he ground out as a writer for hire were of no further interest to him,” Wiesel writes, so long as the checks arrived. Second, he begins to collect the tales told by his circle of friends, many of them veterans of the Spanish Civil War and WWII, who, having come to the gates of the new millennium, provocatively call themselves the “Elders of Zion.” Among others, there are Bolek, “sometimes taciturn, sometimes blustering,” and Diego, an anarchist who speaks Lithuanian-tinged Yiddish, and regretful Yasha, all of them lovers of stories who live in a world whose tales sometimes cannot be told—for some of them have survived horrors that resist description. Yet “God is not silent,” says a rabbi in one piece. “It is by His silence that He calls to you. Are you answering him?” Each moment here is an answer of sorts, as Friedman comes to the side of a desperately ill woman who just may be the one who saved him all those years ago.