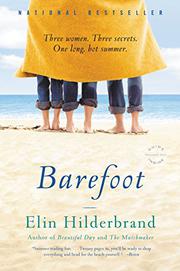 Privileged 30-somethings hide from their woes in Nantucket.

Hilderbrand’s saga follows the lives of Melanie, Brenda and Vicki. Vicki, alpha mom and perfect wife, is battling late-stage lung cancer and, in an uncharacteristically flaky moment, opts for chemotherapy at the beach. Vicki shares ownership of a tiny Nantucket cottage with her younger sister Brenda. Brenda, a literature professor, tags along for the summer, partly out of familial duty, partly because she’s fleeing the fallout from her illicit affair with a student. As for Melanie, she gets a last minute invite from Vicki, after Melanie confides that Melanie’s husband is having an affair. Between Melanie and Brenda, Vicki feels her two young boys should have adequate supervision, but a disastrous first day on the island forces the trio to source some outside help. Enter Josh, the adorable and affable local who is hired to tend to the boys. On break from college, Josh learns about the pitfalls of mature love as he falls for the beauties in the snug abode. Josh likes beer, analysis-free relationships and hot older women. In a word, he’s believable. In addition to a healthy dose of testosterone, the novel is balanced by powerful descriptions of Vicki’s bond with her two boys. Emotions run high as she prepares for death.

Nothing original, but in Hilderbrand’s hands it’s easy to get lost in the story.