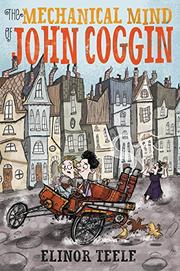 THE MECHANICAL MIND OF JOHN COGGIN

The dreary prospect of spending a lifetime making caskets instead of wonderful inventions prompts a young orphan to snatch up his little sister and flee. Where? To the circus, of course.

Fortunately or otherwise, John and 6-year-old Page join up with Boz—sometime human cannonball for the seedy Wandering Wayfarers and a “vertically challenged” trickster with a fantastic gift for sowing chaos. Alas, the budding engineer barely has time to settle in to begin work on an experimental circus wagon powered by chicken poop and dubbed (with questionable forethought) the Autopsy. The hot pursuit of malign and indomitable Great-Aunt Beauregard, the Coggins’ only living relative, forces all three to leave the troupe for further flights and misadventures. Teele spins her adventure around a sturdy protagonist whose love for his little sister is matched only by his fierce desire for something better in life for them both and tucks in an outstanding supporting cast featuring several notably strong-minded, independent women (Page, whose glare “would kill spiders dead,” not least among them). Better yet, in Boz she has created a scene-stealing force of nature, a free spirit who’s never happier than when he’s stirring up mischief. A climactic clutch culminating in a magnificently destructive display of fireworks leaves the Coggin sibs well-positioned for bright futures. (Illustrations not seen.)

A sly, side-splitting hoot from start to finish.