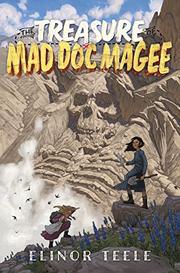 THE TREASURE OF MAD DOC MAGEE

There’s gold in them there pages.

Teele takes her readers on a lively adventure through the hills of a small town called Eden in the waning years of the gold rush. In the mostly white small town of Eden, life for 12-year-old Jenny Burns is about to become a lot more complicated. Jenny’s father, a former prospector, is about to lose his job and their home. With the threat of leaving Eden and her best friend, Pandora, looming, Jenny embarks on a mission to find a rumored golden nugget that’s “bigger than a cowbell.” Jenny teams up with Pandora, a pair of friendly Chinese brothers, and a slew of former prospectors to find the gold. But can those last truly be trusted? When part of the map falls into the hands of one of Jenny’s greatest nemeses, the race is on to see who can deduce the clues faster. Teele injects a lot of personality into Jenny and her friends. Cryptography lessons are seamlessly interwoven into the story, and fans of puzzles and mysteries will eat them up. Teele—or at least her intrusive narrator—has never met a simile that she didn’t like, but the sprinkling of antiquated words and phrases adds a pleasant touch to the story. The gentle subplots of heredity, illness, death, and conservation are an added bonus.

A rollicking read for individuals and book clubs alike.