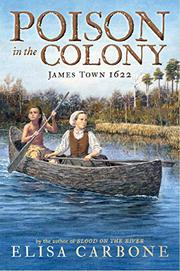 POISON IN THE COLONY

A young white girl observes the beginnings of English colonization of the American continent, including encounters with Native Americans and enslavement of the newly arrived Africans.

Young Ginny Laydon, the first child born in the white settler colony of Jamestown, Virginia, carries “the knowing,” or second sight. Initially, the only person who knows of Ginny’s secret is her family’s friend Samuel Collier, a young white man who acts as Native American cultural interpreter throughout the book (and who was the protagonist of Blood on the River, 2006). Ginny is a descendant of a long line of women who have suffered persecution as witches. When Ginny’s secret is suspected, she is slated to be tried for witchcraft; a later threat of Indian attack on the colony defuses the tension generated by Ginny’s plight. Depictions of Native Americans place these characters as the backdrop, viewed always through Ginny’s eyes, however sympathetic, as other. In one freighted scene, an inscrutable Powhatan man touches Ginny’s forehead, a gesture she feels is connected with her knowing; in another she has a vision of crowded ships, including one full of Africans, and is frightened by the “sheer mass of [people],” drawing no distinction between white settlers and Africans in bondage. Carbone projects her fictional narrative on historical characters (parsed in an author’s note), presenting the white settlers as mostly amicable and welcoming of cultural mixing, and the fundamental violation that is colonialism is not really questioned.

Another settler’s-eye view of Colonial history.