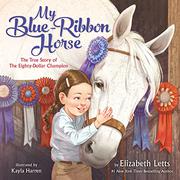 The True Story of the Eighty-Dollar Champion

A picture-book adaptation of Letts’ nonfiction bestseller, The Eighty-Dollar Champion: Snowman, The Horse That Inspired a Nation (2012).

Snowman's story is well known: Saved from a slaughterhouse at the last minute when horse-riding instructor Harry de Leyer purchased him for $80, the gaunt, bedraggled horse didn't fit in at the school for girls where de Leyer taught. But after being sold to a boy living several miles away, the horse repeatedly jumped tall pasture fences to return to what he thought of as home. De Leyer bought him back and trained him; within two years, Snowman was a show-jumping champion. This picture book will be equally appealing to children and adults. Harren's action-packed illustrations, some based on iconic photographs of Snowman, serve it well. However, presumably in an effort to make the story more child-friendly, Letts moves the point of view from de Leyer to his daughter Harriet then back again to de Leyer, a narrative technique that feels clumsy. The book contains some factual inaccuracies: Snowman is described as “old”; the kill man, not de Leyer, brings the horse home to the farm; and de Leyer and his wife are shown as having three children (they had eight). De Leyer and his family are White, as are most background characters. (This book was reviewed digitally.)

A real-life, triumphant horse story worth telling to children, but this attempt falls a bit flat.