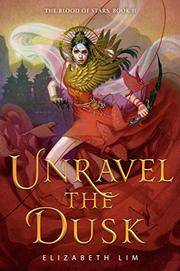 From the Blood of Stars series, volume 2

Cursed, heartbroken, and still trying to save her country.

In this sequel to the Asian-inspired fantasy Spin the Dawn (2019), readers are reintroduced to Maia, now more hardened yet emotionally torn. Though she has discovered great powers and successfully created dresses with elements from the sun, moon, and stars, the country of A’landi is in more turmoil than ever. As she fights alongside an emperor she is quickly coming to despise, Maia also battles a curse that is slowly transforming her into a monster with no memory of her past, love, or family. Her powers, both demonic and magical tailoring skills, however, may help her face the demon controlling the other side of the war. The pacing is a bit uneven, and it is recommended to read the previous book to be able to follow along with the events. The beginning jumps from crisis to crisis without much breathing room but later takes more time for character development, including that of two other strong females. The strength of this story lies in Maia’s internal struggles and the ways the author weaves in lessons learned through various Asian myths and legends.

Readers who enjoyed the first book will find everything amped up here, including the violence and drama.