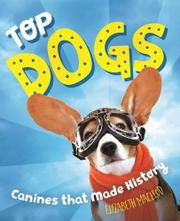 True Stories of Canines that Made History

Dogs have played a role in human history for eons.

MacLeod provides coverage on eight doggy themes arranged chronologically: Seaman, the Newfoundland that accompanied Lewis and Clark; Pekinese dogs’ connection with Chinese royalty; dogs that served in World War I; Togo and Balto and their lifesaving trek across the Alaskan tundra with diphtheria antitoxin; the first American guide dog, Buddy; dogs that served in World War II; bomb-sniffing dogs, including Brandy, who found explosives on a jet in 1972; and search-and-rescue dogs, especially those that served on 9/11. A plethora of excellent photographs accompanies the engaging text. Unfortunately, a profusion of text boxes, sidebars, and other interruptions breaks up the stories. Page-sized featurettes on a yellow background headed “Dog Data” primarily focus on the history of dogs and their natural characteristics. Small pullouts entitled “Woof!” contain brief, miscellaneous tidbits that usually, but not always, relate to the topic at hand. The chapter on World War II dogs also includes: a section on modern war dogs; a Woof! on a border collie that scares birds away from a Michigan airport; boxes on both mythological Cerberus and a dog that defended a Persian city in 456 B.C.E.; and a World War I photo.

Excellent information presented in a frustrating and distracting jumble.