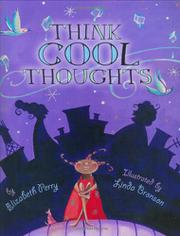 Rich in subtle expressions of feeling and character, this visit to tar beach vividly conveys both the oppressive heat of summer and the warmth within an urban family. After Angel’s mother and her visiting aunt puff their way up the stairs with an old mattress and some kitchen chairs, Angel lies under the stars, counting ice cubes, listening to the cadences of conversation: “. . . the rhythm of a question and an answer and a question and the beginning of another long, long story about someone she didn’t know.” Then she dreams of the buildings all around leaning together to talk “about the stars in the sky and the little streets like threads below them.” Angel wakes to a magically lit dawn, and a rain shower that sets her to dancing and singing in her underwear, while the grownups laugh and harmonize. The lines in Bronson’s flexible city scenes curve and sweep to match Angel’s dance, behind broad, brown faces drawn in Chris Raschka–like planes, and in colors that melt from steamy daytime pinks and yellows to cooler evening blues and purples, and then to a mix of hues seen through big drops of rain. Readers will be counting ice cubes along with Angel, and feeling the same sense of refreshment. (Picture book. 6-8)