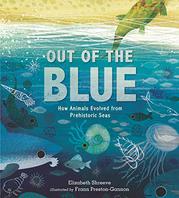 OUT OF THE BLUE

From a world of single-celled microbes to the age of mammals, 4 billion years of evolution.

Shreeve anchors this chronicle of the development of life on Earth with an opening question: Among hippos, dolphins, and sharks, which two are the closest relatives? The book begins to answer with an image of an empty ocean, shown lit by a fiery orange sun and exploding volcano and a description of this alien world. Increasingly complex creatures fill subsequent pages. Along the bottom margin runs a general time framework beginning with the Archaeon Eon and moving quickly through time. In the Devonian and Carboniferous periods, separate spreads show land and water creatures, culminating in fish. Here, with words and pictures, the book explains how human body features developed from those of these prehistoric fish. After the Permian Extinction come dinosaurs and then, finally the Age of Mammals. A penultimate spread explains the surprising answer to that opening question, and the final spread serves as summary, showing the grand variety of life evolving over time “from out of the blue… / and back again.” Along the way, the smooth, accessible text breaks from time to time with midsentence ellipses at page turns to keep readers moving. Other page turns answer questions previously raised. Preston-Gannon’s cheerful, colorful illustrations show an astonishing variety of creatures, all with circular, white-outlined black eyes. The total package is simple and effective.

A sweeping story thoughtfully summarized for the target age group.