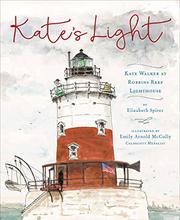 A quiet life can contain multitudes.

In 1882, Kate Kaird, a German widow, and her young son, Jacob, arrived in the United States in search of a better life. Kate had no way of knowing that she would soon move to a lighthouse, be appointed an assistant keeper, and become one of the first female keepers of an offshore lighthouse on the East Coast. McCully’s loose, sweeping, yet specific illustrations combine seamlessly with Spires’ clear and engaging description of Kate’s new marriage to lighthouse keeper John Walker and subsequent relocation to a lighthouse in New York Bay. Daily rituals—the light was tended, the sirens were prepared to run during storms, and a boat was kept ready to be sent out in emergencies—are described with just the right amount of detail. At the same time, dramatic events show how a seemingly simple life of solitude (she was eventually appointed keeper after her husband’s death) can include action and heroics: Kate rescued more than 50 people before she retired at age 71. While not an obvious choice for a children’s biography, Kate comes alive through the combined talents of Spires and McCully, and their portrayal highlights how an ordinary woman can excel and pave the way for others by virtue of her dedication and fortitude. The illustrations reveal an all-White cast.

A distinctive selection that highlights an unknown heroine and her world as a lighthouse keeper.