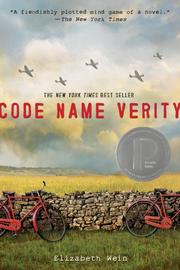 Breaking away from Arthurian legends (The Winter Prince, 1993, etc.), Wein delivers a heartbreaking tale of friendship during World War II.

In a cell in Nazi-occupied France, a young woman writes. Like Scheherezade, to whom she is compared by the SS officer in charge of her case, she dribbles out information—“everything I can remember about the British War Effort”—in exchange for time and a reprieve from torture. But her story is more than a listing of wireless codes or aircraft types. Instead, she describes her friendship with Maddie, the pilot who flew them to France, as well as the real details of the British War Effort: the breaking down of class barriers, the opportunities, the fears and victories not only of war, but of daily life. She also describes, almost casually, her unbearable current situation and the SS officer who holds her life in his hands and his beleaguered female associate, who translates the narrative each day. Through the layers of story, characters (including the Nazis) spring to life. And as the epigraph makes clear, there is more to this tale than is immediately apparent. The twists will lead readers to finish the last page and turn back to the beginning to see how the pieces slot perfectly, unexpectedly into place.