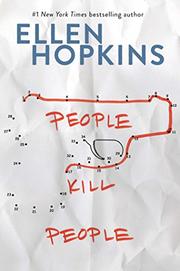 A gun used in an accidental domestic shooting ends up in the hands of one of six Tucson teens whose feelings about guns and violence, immigration and racial superiority, love and sex are explored. Their urges for power—over their own lives or others’—tempt them to consider violent acts. As the day of a pro-immigration rally and counterprotest nears, readers are left guessing which character will kill and which will die, as Violence promises. Violence alternates between free verse omniscient third-person narration and switching to second-person present tense to invite readers into the mind of each major character. Silas finds a sense of belonging in a white supremacist group and is disgusted by his mother’s Jewish boyfriend and father’s Mexican girlfriend; Daniel is left feeling bitter when his Honduran mother is deported and his white father dies, leaving him to live with the white wife and son who were not aware of his existence; and Noelle is a depressed, white, closeted teen, suffering seizures following a tragic brush with gun violence. This structure effectively illustrates how otherwise normal people can become killers. The book avoids glamorizing gun violence and bigotry as the characters are difficult to empathize with. The final revelation, though surprising on a plot level, lacks the emotional impact that the subject matter deserves.