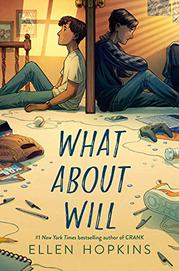 What can a good kid do when his big brother starts being a problem?

Twelve-year-old Trace Reynolds, who is White and Puerto Rican, wants to get noticed for the right reasons: good grades, Little League, pulling weeds for Mr. Cobb next door. Seventeen-year-old Will used to be the best brother, but now he’s so angry. He’s played football since he was a little kid and has been tackled plenty; when he gets horrifically hurt in a JV game, it’s just one too many head injuries. It’s been a year and a half since Will’s traumatic brain injury, and he’s got a hair-trigger temper. He has chronic headaches, depression, and muscle spasms that prevent him from smiling. Trace knows it’s rotten for Will, but still, why did his awesome brother have to give up all his cool friends? Now he argues with their dad, hangs out with losers—and steals Trace’s stuff. At least Trace has a friend in Catalina Sánchez, the new girl on Little League. Her dad’s a retired major leaguer, and she has sibling problems too. Observations from Trace frame Cat as praiseworthy by virtue of her not being like the other girls, a mindset that conveys misogynistic overtones. The fears of stable, straight-arrow athlete Trace are clarified in lovely sparks of concrete poetry among Hopkins’ free verse, as he learns to tell adults when he sees his beloved brother acting dangerously.

Compassionate optimism for a boy who can’t control the chaos around him.