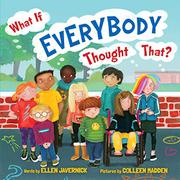 WHAT IF EVERYBODY THOUGHT THAT?

From the What If Everybody? series

Thinking mean-spirited thoughts can be just as damaging as saying them out loud.

Javernick and Madden pair up once again (What If Everybody Did That?, 2010 and What If Everybody Said That?, 2018), this time to address bullying in a school setting. One hopes that all schools are diverse with regard to both culture and ability, but it can be difficult to help students see beyond differences. Javernick poses scenarios in which children exhibit varying physical disabilities, learning disabilities, medical conditions, and more. A group of children is often depicted scrutinizing one (four taller kids in gym class look to a shorter one, thinking, “He’s too little to play basketball” and “He’ll NEVER get that ball in the hoop”) as the titular phrase asks, “What if EVERYBODY thought that?” The following spread reads, “They might be wrong” as vignettes show the tiny tot zipping around everyone and scoring. If one sees someone using a wheelchair and automatically thinks, “Too bad she can’t be in the relay race”—well, “they might be wrong.” The (literal) flipside offered to each scenario teaches children to be aware of these automatic assumptions and hopefully change perceptions. Madden’s mixed-media illustrations show a diverse array of characters and have intentional, positive messages hidden within, sometimes scratched in chalk on the ground or hanging up in a frame on a classroom wall.

Thoughts always inform actions; if we can help youngsters see individuals instead of differences, there’s hope.