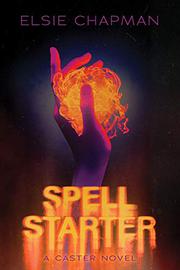 From the Caster series, volume 2

Even in a world with magic, quick fixes come with a cost.

In this sequel to Caster (2019), Aza Wu is again thrust into dangerous tournaments. These are backed not by the Guild but by the ambitious Saint Willow, the Lotusland gang leader. This time, however, Aza does not revel in the freedom of full magic casting; rather, she fears her uncertain control over her new, ill-gotten power and the risk of endangering herself, other fighters, and the world around her. Reluctantly working as Saint Willow’s squeezer and forced to compete nightly in these deadly games, Aza is desperate to find a way out of this predicament that will also keep her parents safe and the family business intact. Though it continues to be strong in action, this second offering spends more time exploring familial obligation, moral choices, and compromise as well as human-made (or magic-made) ecological disasters. Aza’s parents, still ignorant of their daughter’s real job, play a greater role here and are supportive of her, from her work to being interested in whatever sexuality or relationship she may lean toward. There is some diversity in characters, but the book mostly highlights Chinese culture, from Aza’s family’s tea business to the strategic and thoughtful use of romanized Cantonese phrases scattered throughout.