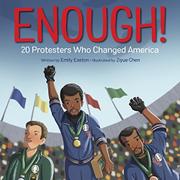 A shoutout to heroes of nonviolent protest, from Sam Adams to the Parkland students.

Kicking off a proud tradition, “Samuel threw a tea party.” In the same vein, “Harriet led the way,” “Susan cast her vote,” “Rosa kept her seat,” “Ruby went to school,” and “Martin had a dream.” But Easton adds both newer and less-prominent names to the familiar roster: “Tommie and John raised their fists” (at the 1968 Summer Olympics, also depicted on the cover), for instance; “John and Yoko stayed in bed”; “Gilbert sewed a rainbow” (for San Francisco’s Gay Freedom Day parade in 1978); “Jazz wore a dress”; and “America [Ferrera] said, ‘Time’s up.’ ” Viewed from low or elevated angles that give them a monumental look, the grave, determined faces of the chosen subjects shine with lapidary dignity in Chen’s painted, close-up portraits. Variations in features and skin tone are rather subtle, but in general both the main lineup and groups of onlookers are visibly diverse. The closing notes are particularly valuable—not only filling in the context and circumstances of each act of protest (and the full names of the protesters), but laying out its personal consequences: Rosa Parks and her husband lost their jobs, as did Ruby Bridges’ first-grade teacher, and Tommie Smith and John Carlos were banned for life from Olympic competition. Pull quotes in both the art and the endnotes add further insight and inspiration.