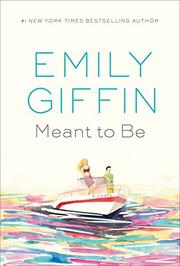 Giffin’s latest charts the course of true love between an American aristocrat and a troubled fashionista.

Almost immediately, readers will guess that Giffin’s protagonist, Joseph S. Kingsley III, a media darling since birth, is a re-creation of John F. Kennedy Jr. In addition to Joe’s darkly handsome good looks, there are many other similarities, such as his double failure of the New York bar exam and his stint as a Manhattan assistant district attorney. But Joe’s late father was an astronaut, not the president, and locations associated with the Kennedys, such as Hyannis Port and Martha’s Vineyard, have been moved to the Hamptons and Annapolis. Instead of a sister, Joe has a protective female best friend, Berry Wainwright. Readers may be so obsessed with teasing out fact from fiction, and wondering if the outcome for Joe is going to be as tragic as JFK Jr.’s fatal 1999 flight, that they may be distracted from the engaging story of Joe’s co-protagonist, Cate Cooper, who is—apart from a superficial resemblance to Carolyn Bessette-Kennedy—largely a fictional creation. When Joe and Cate meet-cute on a Hamptons beach where Cate, a model, is posing, both are immediately smitten. However, the paparazzi are determined to milk every ounce of scandal from the social chasm separating them. On the surface, Cate is the product of a middle-class upbringing in Montclair, New Jersey, but her interrupted education and her forced flight from an abusive home have shamed as well as strengthened her. Like her real-life counterpart, Cate rises in the fashion industry and becomes known for her minimalist style. The couple’s courtship drags a bit on the page despite witty banter and steamy encounters. It is the conflict brewing when their pedigrees clash, and, particularly, Cate’s consciousness of the disparity, that grips us. Whether these knockoffs can avoid the fates of the originals is the main source of suspense here.

An intriguing meditation on the meaning of “meant to be.”