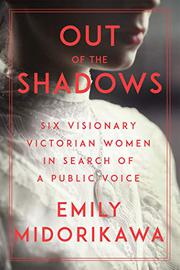 OUT OF THE SHADOWS

Six Visionary Victorian Women in Search of a Public Voice

How spiritualism and the occult lit a path to fame and influence.

Co-author of a study of women’s literary friendships, Midorikawa follows up with lively portraits of six mid-19th-century spiritualists who faced down derision to become significant advocates of women’s rights. American sisters Kate, Maggie, and Leah Fox were notorious—and, for a time, highly paid—spiritualists who conveyed messages from the dead through mysterious knocks. From humble beginnings in upstate New York, the Foxes inaugurated the modern spiritualist movement, traveling the world demonstrating their powers. They were repeatedly investigated by skeptics, including committees who strip-searched them, which Leah once described as “very insulting and even violent.” Emma Hardinge, a British woman who started out as a singer and actor, was drawn into the Orphic Circle, a group of aristocratic men who conducted experiments “through the mirror and crystal,” assisted by various “young ladies” who underwent a trance state during the tests. Although initially skeptical, Hardinge discovered her talents as a medium—and public speaker. Touring the U.S., she became a popular orator, supporting Lincoln’s candidacy for president, offering a eulogy after his assassination, raising funds for Union soldiers, and lecturing on the rights of women. Ohio-born Victoria Woodhull, who, like Hardinge, offered “the soothing balm” of connection to Civil War dead, found her fame as a spiritualist enhanced by the attentions of shipping magnate Cornelius Vanderbilt. As his protégée, Woodhull amassed considerable wealth and established her own brokerage firm. A passionate champion of female enfranchisement and free love, Woodhull announced her candidacy for president in 1872. Georgina Weldon, a spiritualist whose husband wanted her declared insane, became a prominent spokesperson for reform of Britain’s “lunacy laws.” Hailed by fellow spiritualists, the women were at times mocked, thwarted, and even imprisoned by those who tried to silence them. Drawing on archival material and contemporary accounts of the women’s personal and professional entanglements, Midorikawa briskly recounts their eventful lives, accomplishing the goal inherent in the book’s title.