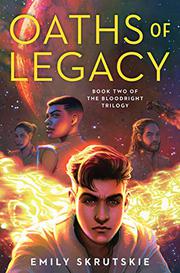 From the Bloodright Trilogy series, volume 2

In this sequel to Bonds of Brass (2020), Gal wrestles with his love for Ettian, the boy who took on an empire to save him, and his new role as Ettian’s prisoner.

Narrated by Gal from his gilded cage on Archon’s capital planet, and then from inside Archon's dreadnought flagship in the middle of a war with his mother’s empire, the Umber bloodright heir has no idea how to feel about anything. He blames his former roommate and lover for his imprisonment. Then again, Ettian saved his life by taking his throne. But Ettian lied! But so did Gal….All Gal really knows is he’s currently Ettian’s human shield and the best hope the young emperor has of staying alive once Gal's mother brings the full fury of the Umber fleet down on Ettian's newly crowned head. Meanwhile, Gal’s schemes to regain freedom and his own crown dig him deeper into danger when Ettian takes his advice and goes to the front, dragging Gal and their friend Wen—who is known as Archon’s new Flame Knight—with him. Gal soon realizes that if he wants to keep his and Wen’s heads away from Archon general Iral’s ax, Ettian needs to remain in power. And Gal, with all his training and knowledge of true empire, is Ettian’s best chance. With so many outcomes leading to death for one or all of them, Gal walks a fine line threaded with panic, post-traumatic stress, and lessons in controlling what you can instead of obsessing over what you can’t. Skrutskie strives for a fresh look at the lover-to-hater-and-back-again trope, taking quite a few unexpected detours among her diverse and sprawling worlds. This installment maintains quite a slow burn between all the recaps of the first volume and the necessarily slow machinations of a war in space fought with mileslong ships, but the last third of the book does return to the fast-paced, intimate action many readers came to love in Bonds of Brass. Above all, it’s a character study of Gal, whose struggle with panic attacks and PTSD are very real and well done, though he’s often hard to like when he’s being a selfish, obtuse know-it-all.

Readers of the Bloodright Trilogy will enjoy this second installment, despite its leisurely pace, and they'll be left eager for Book 3.