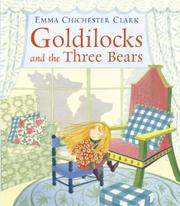 GOLDILOCKS AND THE THREE BEARS

Three pretty maids all in a row—well, make one of them spunky, as Chichester Clark adds her rendition of the classic character to those by Sanderson (Goldilocks, 2009) and Spirin (Goldilocks and the Three Bears, 2009). Hers is no coy and sweet lass; she’s more naughty than nice. The illustrator’s signature style with delicately drawn, bug-eyed characters matches her jaunty retelling: “Bulls-eye!” Goldilocks cries, “Now that’s my kind of bed!” Daddy Bear later growls, “That someone is a hooligan and a thief.” As Goldilocks makes her escape, Mommy Bear says, “I’ll never know how a little girl like that could be so naughty!” The large format provides ample space for the watercolor-and–colored pencil illustrations to fill the scenes with details in china and fabric patterns and wry touches: Goldilocks reads Little Red Riding Hood while lolling in Baby Bear’s bed. The bears’ house is quite lush—no cabin in the woods here. Saucy and more playful than the other two, this version proves good things DO come in threes. Buy them all. (Picture book/folktale. 4-7)