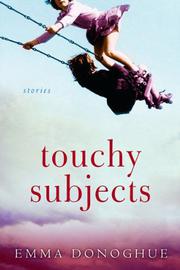 How we live today is not a new subject for Donoghue, whose early fiction includes the coming-of-age tale Stir-Fry (1994) and an elegiac portrait of a long-term lesbian romance (Hood, 1996). Same-sex affairs and general gender confusion remain fruitful topics for the author’s unsentimental probing in such stories as “Team Men,” “Speaking in Tongues” and “The Welcome”—the latter also geing a very funny portrait of politically correct collective life in a women’s commune. But just as Donoghue can rove from the historic to the modern world, she matches the acuity of her looks at homosexual relations with her astuteness about heterosexual families (“Through the Night”), the longing for a baby (the hilarious title story and “The Man Who Wrote on Beaches”) and people’s obsessive devotion to their pets (“Do They Know It’s Christmas?” and “The Cost of Things”). Not that these stories can be categorized under a single category heading; they’re too multifaceted, too cognizant of the complexity of human nature for that. Donoghue has the born storyteller’s knack for sketching a personality and pulling readers into a plot in just a few pages, and she confidently changes scenes from her native Ireland to her current home in Canada or America’s West Coast without ever losing her ability to evoke authentic emotions and landscapes. Most impressive of all is her gentleness toward her characters: “WritOr,” the chronicle of a Writer-in-Residence’s bleak sojourn to a small-town college contains some of the funniest, saddest descriptions ever of people’s pathetic delusions of literary grandeur, concluding with someone of genuine talent turning up in the writer’s office, leaving him “dangling somewhere between hope and despair.”

Delightful examples of Donoghue’s all-encompassing talent that should be read by fans of her period pieces as well as her gay audience—indeed, by anyone who cherishes thoughtful, warm-hearted fiction.