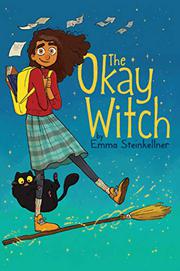 From the Okay Witch series, volume 1

It is Halloween when Moth Hush finds out she is descended from a line of witches.

Her mother reveals the story of their witch origins going back to 17th-century Europe, which Moth’s maternal grandmother, Sarah, fled along with her order for supposed safety in Founder’s Bluff, Massachusetts, only to find persecution there. Led by Sarah, the witches escaped the wrath of the Puritans through a blood ritual that opened a portal to Hecate, a spiritual realm that provided safety. Moth’s mother rebelled and broke away from the coven to live in the real world, ultimately as a single parent to Moth in the 21st century. After a talking black cat (the spirit of a deceased neighbor) appears and befriends Moth, Moth peeks at her mother’s diary—which opens a portal to Hecate, and Moth secretly begins to practice spells unsupervised and to connect with her family there. Moth and family sort through a complicated lineage whose legacy reveals itself to be very much alive in present-day Founder’s Bluff. In Steinkellner’s graphic panels, Moth and her family have brown skin and puffy dark hair, and the 17th-century coven is shown to be multiracial. The complex history provides a mechanism through which Moth sorts through her own coming-of-age as a modern girl of color, and it’s the loving, oftentimes humorous rapport among the Hush women that grounds this graphic novel.